Dear AC followers, welcome back from your holidays! It looks like you loved the free Bonus pack released this Summer, and we thank you for your great support: this month we introduce you the DreamPack Vol.2, and we are glad to officially confirm that the awesome Scuderia Cameron Glickenhaus SCG003 will be included in the new package: prepare yourself to join great fights on track!

Dear AC followers, we are completing the final phase of betatesting, and we are glad to announce that Assetto Corsa 1.3 and Dream Pack 2 will be available for download by October 8th!
With Assetto Corsa 1.3 the process of improvement of all aspects of our simulation continues to progress properly. Here's following just few highlights of what you can expect to find in Assetto Corsa next week:
Assetto Corsa Dream Pack 2
The new Dream Pack 2 will include the Circuit of Catalunya, based on Laserscan point cloud, featuring GP and MotoGP layouts, as well as 7+2 new awesome and legendary cars:
Lamborghini Countach 5000 Quattro Valvole
Lamborghini Huracan GT3
Ford GT40 MK1
Scuderia Cameron Glickenhaus SCG003
AUDI R8 ULTRA 2014
RUF RT12R AWD
RUF RT12R RWD
BMW M4 Coupe
BMW M4 Coupe Akrapovic Edition
The Assetto Corsa Dream Pack 2 will be available on Steam by October 8th, at 7,99 EUR.
Assetto Corsa 1.3
Physics
64-bit natively supported and car physics calculated on multi-thread. The physics engine has been reworked to become completely multithreaded: as a result, the driving precision is augmented, the accuracy further improved and the physics solver has enough horsepower to completely resolve any difficult calculations any speed, achieving butter smooth Force Feedback and complete elimination of signal noise and vibrations. We'll be back with more details on physics updates when the new build will be released next week.
Graphics
2D/3D models, textures and shaders have been updated and improved, in order to keep the standards reached with the latest content. Now windscreens receive shadows, and a new camera facing feature improves the rendering of 2D/3D objects on track. A first basic support for dynamic objects on tracks has been added as well, and it will be improved in future updates, with the aim to get a more immersive environment.
Sound
Fine tuning and improved algorithms for audio editing: all new cars benefit by use of new techniques of recording and sampling for engines, interiors and exhaust systems, also thanks to the technical cooperation of Akrapovic. This allows to recreate a more detailed audio trace and the exclusive detail of each car, improving the immersion while driving. Content that are available already in Assetto Corsa will be updated during the process, to bring them to a higher level of realism and in line with the latest quality standards.
Multiplayer
Dedicated server has been optimized in order to improve general stability.
New parameters and features have been added to server configuration, in order to please the requests of gamers who are looking for a more comprehensive online experience.
Get ready to experience the most advanced driving experience! 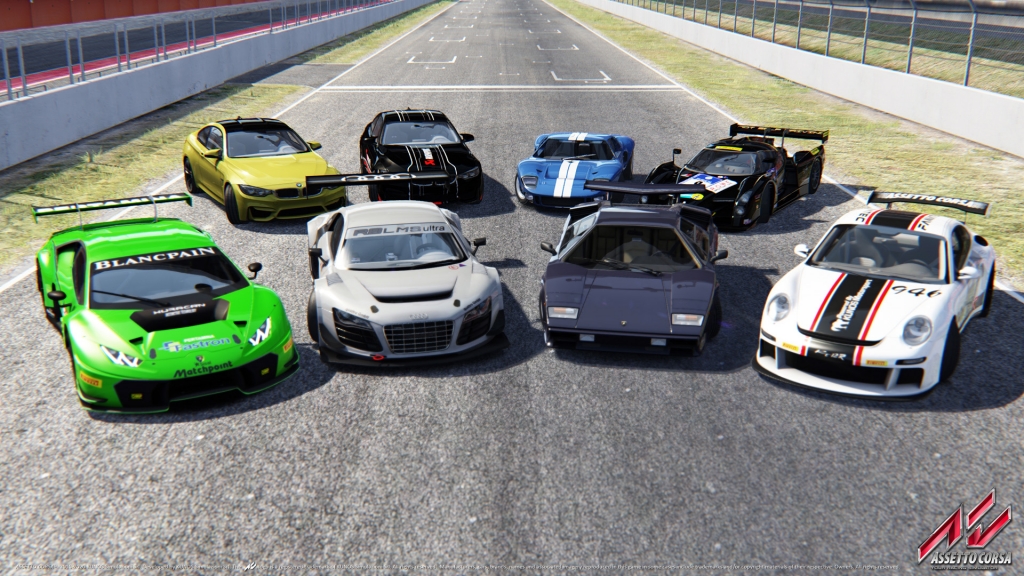 This package adds the Circuit of Catalunya and eight new awesome cars in ten different versions to the Assetto Corsa racing game. Get it today and join the most thrilling virtual driving experience ever!


The Circuit of Barcelona
Due to its complexity, it took nine months of work to reproduce the Circuit of Catalunya. Laser Scanning Technology allowed the team to recreate the most faithful version of the Spanish track available in any racing game to date.

For the first time ever in a PC racing simulation, the Circuit of Catalunya has been digitally recreated using Laser Scanning Technology. Every single detail of the track has been reproduced with maximum level of precision. A resolution of 2 cm guarantees that every single bump, curb and slope is a perfect match to the real counterpart. The resulting accuracy combined with the advanced physics model of Assetto Corsa offers an unprecedented driving experience blurring even more the difference between virtual racing and reality.


The Cars
Similarly to Dream Pack 1, the cars in Dream Pack 2 were selected through polls, with gamers voting for their favourite manufacturers and models on our website. The pack includes a perfect mix of vehicles of different classes, types and periods, ready to satisfy our fans’ hunger for racing.

There is the Lamborghini Huracan GT3, introducing this awesome racing car produced by Lamborghini Automobili for the first time in any PC simulation, followed by the legendary Lamborghini Countach 5000 Quattro Valvole. The epic Ford GT40 MK1 is the first FORD model to be included in Assetto Corsa. The AUDI R8 ULTRA 2014 is one of the most-wanted racing cars by Assetto Corsa fans, as well as other unique models such as the RUF RT12R and the SCG003 prototype, designed and built by Scuderia Cameron Glickenhaus.
The BMW M4 Coupé also deserves a special mention, as this car has been reproduced in partnership with Akrapovi?, a brand that is synonymous with the highest level of design, performance enhancement and the creation of an unmistakable, deeply resonant exhaust sound.

The game now supports native 64-bit code. The physics engine has been reworked and is now completely multithreaded. As a result, the driving precision is augmented, the accuracy has further improved and the physics solver has enough horsepower to completely resolve any difficult calculations at any speed, achieving butter-smooth Force Feedback and a complete elimination of signal noise and vibrations.

With version 1.3 we now present you a completely reworked tyre model that includes new features in connection with tyre-speed sensitivity, combined grip, slip angles and ratios, load sensitivity, rolling resistance and most importantly, separated heating for surface and core temperatures. As a result, driving in Assetto Corsa is now more realistic than ever. The driving experience is more natural while at the same time also more challenging at the limit. Real-life features such as driving carefully in the first two laps to heat the tyres or taking it easy to cool down overheated tyres after a spin, the handling of the car changing from turn to turn depending on your driving style or as a result of driver errors and choosing the correct tyre compound depending on the track and car combination and also your driving style will now become part of your daily driving experience in Assetto Corsa.

We did not stop at the tyres though. We have improved the ABS system and now depending on the car, Assetto Corsa supports different generations of ABS systems using 1 to 4 channels. We have enabled active differentials also for RWD cars, such as the brand new BMW M4, which is part of the Dream Pack 2 DLC. We also have improved the height sensitivity of front splitters and diffusers making their influence more complex from a setup engineering point of view and more demanding from the aspect of the driver, creating an overall more satisfactory experience for everyone.

Do not just drive by memory some binary data values that resemble cars on your screen. Drive cars that are “alive”, constantly changing their behaviour from turn to turn as a response to your personal driving style.